Jaimie Hilfiger is a model, actress, beauty mogul, and self-made entrepreneur — yes, with a famous last name too. BUT that is only one small fraction of her story. She’s opening up about her skincare struggles with type 2 rosacea — and how it led her to launch a skincare line, break into the beauty industry, and help others cultivate confidence through self-care.

“Never be afraid to be yourself” is her mantra. In this episode of Lift U Up: Inspiring Health Stories, Jaimie tells her story of early success, letting go of insecurities, and embracing inner and outer beauty.

Don’t let her name fool you — Jaimie Hilfiger worked exceptionally hard to get where she is today. Jaimie was raised in New York and started modeling at the young age of 7. She let modeling take a backseat while in school, but after graduating college early, Jaimie set out to LA to pursue the entertainment industry. She hit the ground running, found an agent, and worked her way up in the industry.

Jaimie’s experience in front of the camera drastically changed after a move to Miami in her late 20’s. Almost immediately, her skin began to break out in welts. She had severe redness and there was nothing Jaimie could do to calm it. In an industry where looking her best was an expectation — and part of the job, this was a hard pill for Jaimie to swallow.

Her livelihood was at stake.

Jaimie was eventually diagnosed with Type 2 Rosacea and started her hunt to find a way to restore the smooth skin she once had. The harsh products her dermatologist was recommending only made things worse in the long term.

Before long, she was introduced to the founder of La Curcio, a gentler skincare line Jaimie was exploring. After giving their current collection a try (and seeing great results), Jaimie collaborated with them to create a capsule collection designed for sensitive skin like her own.

Since then, The Jaimie Hilfiger Collection by La Curcio has grown into both skincare and makeup, all with healthy, vegan, and cruelty-free ingredients, as well as earth-friendly packaging. Today Jaimie continues to expand her collection and is thrilled at the impact she is making on people’s inner and outer beauty.

She shares, “Never be afraid to be yourself,” and lives by that advice each day.

What else can you expect in episode 62 of Lift U Up: Inspiring Health Stories?

Where to find Jaimie Hilfiger: 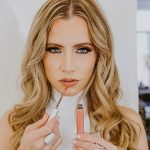