The Bold Beauty Project has been shattering beauty standards since 2016. In the latest episode of Lift U Up: Inspiring Health Stories, Shelly Baer shares her journey of breaking the stigma that comes with disability. After a diagnosis of rheumatoid arthritis at the age of three, Shelly never let it slow her down — but she did struggle to fully accept her identity as a disabled woman. Decades later, Shelly founded and co-directed a photography exhibit, Bold Beauty Project, that changed her life and also the perception others had about people with disabilities.

Growing up as a woman with rheumatoid arthritis, Shelly Baer did not see women who looked like her represented in the media, which is an experience common for people with disabilities. Shelly had trouble owning her identity as a disabled woman, and instead worked hard to find success with other passions. She pursued a career in social work and never imagined her career to intersect with the disabled community.

Later, while serving on the board of the Center for Independent Living South Florida, Shelly was offered a role in a photography project that forever changed her path. It started as a simple photoshoot of a model in a wheelchair, and with Shelly’s help, turned into a project with much bigger impact. Shelly, the Center for Independent Living, and the photographer found a diverse team of 20 models with disabilities and included them in a series of photos. Their angle: to ask each model how they see themselves as beautiful and capture it on camera.

The show saw incredible success through not only fundraising, but by impacting their audience’s views of people with disabilities. It increased the sensitivity and appreciation for people with different abilities, because, after all, there is no such thing as “normal.” After the show’s success, Shelly went on to create the Bold Beauty Project, where they have held shows across the country (and internationally) to spread the word that beauty comes in all shapes and sizes.

What else can you expect in episode 63 of Lift U Up: Inspiring Health Stories?

Where to find Shelly Baer and Bold Beauty Project: 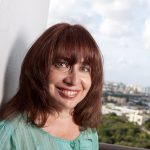