“The biggest difference we can make comes down to the sum of the small things we do for others each day.” – Megan Snedden

This quote by today’s podcast guest, Megan, captures her philosophy about creating a life filled with purpose through random acts of kindness. What started as a viral video on Facebook led Megan to creating The Kind Effect, a movement where Megan travels the world performing good deeds for strangers. In this week’s episode of Lift U Up: Inspiring Health Stories, Megan shares the origin of her random acts of kindness, the science behind a kind act, and how her kind acts changed over the pandemic (there may have been a dinosaur involved!).

Megan Snedden started her career in journalism, so she is no stranger to storytelling. Megan worked for mainstream media outlets, trying hard to climb the ladder, writing for bigger and bigger outlets until she realized she began to feel unfulfilled. The more she wanted to write feature stories that were impactful and positive — the more push back she received from higher ups. She knew she had to make a change.

It wasn’t until she experienced the painful, life-changing loss of her dad that she decided to pursue this greater sense of purpose. With a nudge from a friend, Megan took action and filmed her first random act of kindness. She gifted a bouquet of flowers to a woman who recently lost her dad (a story she could relate to) just before her wedding. She captured video of the whole thing, and it just happened to go viral.

Things get even weirder (as Megan would say) when The Ellen Degeneres Show reached out to her, invited her to be in the audience for an episode on do-gooders, and the audience was collectively gifted $1,000,000! It was an experience that she will never forget and allowed her to continue sharing more kindness with the world.

Since then, Megan has created a movement of kind acts to set a good example and inspire others to be kind. Afterall, there is a science behind how being kind to others, helps us feel better, and can help pull us out of depression and anxiety. From traveling the world, creating viral kindness videos, and even finding a way to be kind while social distancing – to Megan, kindness is a habit, not a hobby.

What else can you expect in episode 65 of Lift U Up: Inspiring Health Stories?

Where to find Megan Snedden and The Kind Effect: 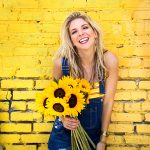