Is it okay to have more than one dream in life? If you were to ask Kaleb Thornhill, the answer would be an astounding yes. The NFL Professional (and guest on this week’s episode of Lift U Up: Inspiring Health Stories) challenges individuals daily to keep raising the bar. Everyone’s purpose can be ever-evolving, just like his.

This year, Kaleb Thornhill is deep into his 11th season working as the Director of Player Engagement for the Miami Dolphins. He describes his job as engaging, educating, and empowering individuals to reach their full potential both on and off the field.

Kaleb’s dream was not always to be where he is today. As a young man, he had hopes to join the NFL. However, after a four-year collegiate career, things didn’t go as planned. After five surgeries and the loss of his dear father, Kaleb was at a critical moment in his life. He saw the opportunity to live his life to the fullest, and that even though he wouldn’t have a football career on the field, he could still carry on his father’s legacy in a new way. Kaleb describes this important moment as his “Identity Foreclosure” that he luckily overcame. Kaleb came to the conclusion, “If I can’t be on the field, I want to find another way for involvement.” From there his career with the NFL began.

After one year in Detroit in an operations role, Kaleb set his sights on becoming a Director of Player Engagement. The 25-year-old jumped through hoops, but finally was able to secure his spot with the Dolphins, one step closer to making a difference in players’ lives. Today he works with players who often have to make big decisions at a young age, and who have also already met their “dream” and are unsure of what to do next in life. His impact extends even further through the co-founding of his non-profit, involvement in starting The Dolphins Business Combine, and creating Mentor Presentations distributed to student athlete support roles.

No matter if you are an NFL player or someone who feels like they’ve already “peaked”… there is always another dream to chase.

Where to find Kaleb Thornhill: 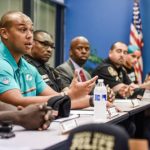