Three-time world dance champion and emmy-nominated choreographer Louis van Amstel joins Lift U Up: Inspiring Health Stories to share his life story – from starting dance at 10 years old, through the highs and lows of working on Dancing with the Stars, to building an online business that undeniably adds the value of dance and health & fitness into his client’s lives.

The Beginning of it All

Dutch-born Louis van Amstel was 10 years old when his mother and grandparents enrolled him in dance lessons. With no idea this hobby would evolve into Louis’ career, the family had one goal in mind: to improve his manners and etiquette. The passion was not there immediately for Louis either. His main motivator? The competitive nature of dance and the high that came along with winning.

Luckily, Louis stuck with it.

Turning a Hobby into a Career

The more Louis danced, the more he learned to love the art. What started as a hobby turned into his career, and he spent his young adulthood learning, training, and competing in ballroom dance. Louis earned more than a few titles in those years, including World Professional Showdance Champion, Professional World Latin Finalist, and more.

Making it to New York

In 1997, Louis was offered a life changing offer to move from his home country to help choreograph a show in New York. This offer was so life changing, Louis said no. However, almost immediately Louis was struck with regret and realized whether it was this job or another, New York was where he was meant to be at this stage of his life.

After taking on several projects in New York and making a name for himself in the United States, Louis was called in 2005 to work on a new show in Los Angeles: Dancing with the Stars.

“The rest was history,” said Louis.

Louis worked as the creative director, choreographer, and performer for both the Dancing with the Stars live show tours and television show for 13 years.

Dance as a Therapy

When Louis reflected on the role dance has had in his life since the age of 10, he shared that from the beginning, it was a form of therapy for him. He had a tough home life, and dance gave him the ability to find healthy ways to release stress and anxiety. Because Louis believes that dance is the best therapy in the world, he has spent the last decade developing LaBlast Fitness, a program that combines ballroom dance and fitness that is fantastic for both your physical and mental health. LaBlast offers virtual, on-demand and in-person classes that help people take the beautiful artform that is dance and get in the best shape of their lives.

What else can you expect in episode 67 of Lift U Up: Inspiring Health Stories?

Where to find Louis van Amstel and LaBlast: 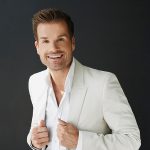