Torre Washington is changing the perception of bodybuilders as we know them. As a vegan for the last 22 years (and vegetarian since birth), Torre has mastered what it means to build muscle on a plant-based diet. On today’s episode of Lift U Up: Inspiring Health Stories, Torre walks us through his journey to plant-based eating, bodybuilding, and educating people around the globe on the importance of a vegan lifestyle.

Growing up in a Jamaican household, Torre’s mother raised him and his brother as vegetarians. She taught them about the importance of eating from the earth, which was aligned with her religious beliefs. It wasn’t until 1998, while he was in college, when Torre explored a vegan lifestyle. At the time Torre did not know the term “vegan” at all, but began to explore Rastafari and connect with the earth. Torre knew that if he was going to call himself a Rasta, that he would do it with integrity – and go all the way. For him, this meant cutting out all animal products, eating from the earth, and even using natural utensils.

Torre’s love for working out came even before this time of his life, when he was just a young kid. Moving around at a young age meant Torre had moments in his childhood where he was picked on. As a result, he wished to be like the superheroes he saw in the comics. He wanted to build the same muscle he saw in the cartoons, so he picked up his grandfather’s old weights and the rest fell into place. Even as a high school student, Torre was training others. This hobby, as well as a budding career, evolved into a passion for bodybuilding in his adulthood. When people started to ask him, “How can you bodybuild when you’re vegan?” he simply replied, “It has never stopped me before.”

Today, Torre has turned his years of experience in bodybuilding, training, and educating others into his lifework. His training style focuses on building a physique his clients strive for. He trains and coaches clients globally through his work on the fitness app Centr, online programs, speaking engagements, and other resources.

Where to find Torre Washington: 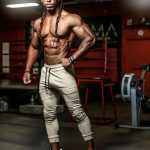